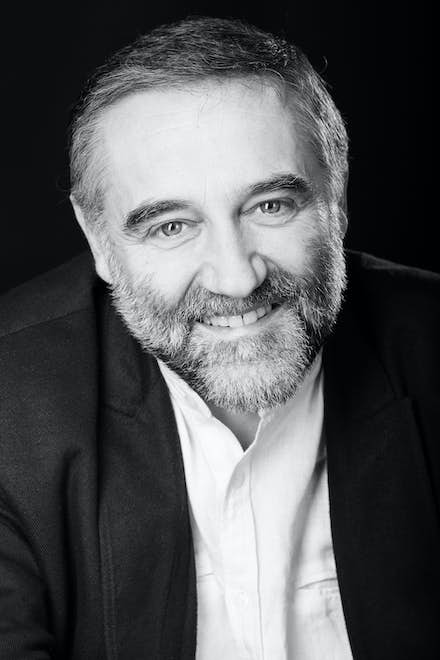 Alexander Sekulov was born on January 6, 1964 in Plovdiv, Bulgaria. He graduated from Professional School for Stage Arts as an assistant producer and has a Master’s in Bulgarian Philology from Plovdiv university “Paisii Hilendarski”. Sekulov has been the theatre’s dramaturg since 2012. He is a two-time recipient of the prestigious Askeer Award for best contemporary Bulgarian play – No Power for the Electric Chair (2016) and Debelyanov and the Angels (2019). His newest play Odysseus, based on Homer, was awarded Plovdiv Prize for Literature.

Alexander Sekulov’s works are translated in English, German, French, Hungarian, Serbian, Macedonian. He is the author of five poetry books, several books with essays, several plays, and the journalistic book “The History of the Minimum Resistance. Chronological novel in one column” /2008/.  Sekulov published the art collections “Nasco H. Stories with Rum, Ginger, Raisins and Honey” / 2005/ and „The Little Saint and the Black Pepper Men” /2007/ in partnership with artist Atanas Hranov. Sekulov and Hranov are the authors of the travelling exhibition organized by the Cultural Institute of the Bulgarian Ministry of Foreign Affairs “The Floating Town and the Black Pepper Men” which premiered in 2008 at the Apolonia Art Festival in Sozopol.

He wrote the daily column “Under the Yoke” in “Maritza” newspaper from 1993 until 2009. For this column he had been awarded with “Plovdiv” prize for Journalism in 1995.

He was the Executive Director of European Cultural Month – Plovdiv 1999.

He is a part of the open civil initiative “I Love Plovdiv” created at the end of 2005.

Sekulov is the creator of the Art festival “Summer Time” in the Old Town of Plovdiv and of Plovdiv Music Stage organization.